From Lagoon Is Fun Wiki
Jump to: navigation, search

The Beach Boys are an internationally recognized rock band with ties to Lagoon that are known for their harmonic surf music. 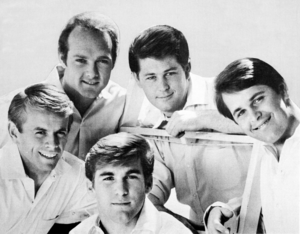 The Beach Boys in 1965, the year Salt Lake City was released

The Beach Boys performed at Lagoon's Patio Gardens at least seven times between 1963 and 1970. The band proved to be wildly popular with Utah teenagers and returned to Salt Lake City just three months after their first Utah performance at Lagoon.

On the night of September 7, 1963, after their first show at Lagoon, the Beach Boys wrote the song "Fun Fun Fun" in their hotel room. The song is about Shirley England, the daughter of the Utah radio station owner who promoted the show. The song became one of the band's greatest hits.

There's a park near the city, yeah all the kids dig the Lagoon now
It's full of all kinds of girls and rides and we'll be flyin' there soon now

Three of Bombora's six audio tracks were performed by the Beach Boys. These songs are:

A fourth track used on Bombora, Ride the Wild Surf by Jan and Dean was co-written by Beach Boys lead singer Brian Wilson.